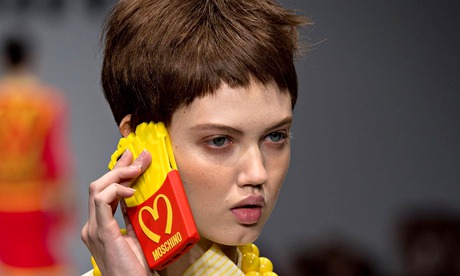 No you’re not mistaken, that is a photograph of a fashion model with a packet of McDonald’s fries in her hand. In this case, the golden arches come in the form of an iPhone case, but they have also been strutted down the catwalk – as part of Moschino’s Spring/Summer collection – in various other shapes and sizes. Take the handbags disguised as a happy meals, for example, around £900 will get you the most expensive McDonalds you’ve ever had. It doesn’t stop there. It seems that this summer fashion is all about fast food, but not about eating it.

Moschino started the trend, boldly brandishing the golden arches on their accessories and making dresses out of giant sweet wrappers, but now other designers are jumping on board. Charlotte Olympia has handbags in the shape of Chinese takeaway boxes and Anya Hindmarch has taken it even further by introducing handbags made out of crumpled crisp packets. I can’t help feeling that fashion celebrating fast food this way is just, slightly, hypocritical.

Of course these new lines of accessories have already caused a great deal of controversy, with health campaigners accusing the brands of glorifying fast food and promoting bad eating habits. This comes at a time when the NHS has just announced plans to lower the threshold for gastric band surgery in a bid to cope with obesity, meaning another 800,000 people could be eligible for the weight loss operation. I think it’s safe to say that it is not the models and editors who are sporting these accessories that are cause for concern, it is more likely to be the kids who will get their hands on the fakes (being sold for as little as £3) and buy into the whole fast food concept.

McDonald’s is a brand which hardly needs extra advertising and I’m inclined to believe these handbags are not going to make huge differences to the number of Big Macs sold. That said, there’s something very distasteful about this trend (and I don’t just mean the cheeseburgers.) For me, it is a combination of the glamorisation of fast food in this intrepid way and the sheer irony of the whole thing. I’m just not lovin’ it.

I wrote a thing about health privilege. - - It’s very long and unedited (sorry), I thought I should get it out before I changed my mind. I’ve been toying with the idea of writing about living with a chronic illness for a while, particularly since I had a flare up at the beginning of the year and it’s made me reassess a few things. I’ve written about personal things before but this is something I’m still working through day to day - it has ups and downs and so it’s harder to share. But given the strange times we are now in and seeing the response to Covid-19, I wanted to be more open about it. We need to hear more voices of those living with chronic and invisible illness. #chronicillness #ibd #coronavirus #invisibleillness #sick #stayathome
Went outside last night ✨ . . After weeks of barely feeling capable of leaving the house at the weekend, last night we drank espresso martinis and ate the best halloumi fries at @horticulturencl and then sipped gin in the Bigg Market toilets @wc_newcastle 🍸now I’m back on the sofa 👌
Happy birthday mate ❤️
Graduated with a Distinction from @sunderlanduni today, received a highest achievement award and gave the student note of thanks - quite a day to round off what’s been quite a year 🎓
🍂🍁🍂🍁
Nice 🇫🇷❤️
Èze - part II 🇫🇷
Èze 🇫🇷💙
Monaco 🇮🇩
Early morning runs have the best views.