It’s not the first time a fashion retailer has sparked controversy, and it certainly won’t be the last. Karen Millen is the latest high street brand to hit the headlines for using, what can only be described as, dangerous mannequins to display one of its new season dresses. If you haven’t already seen the photo which swept across Twitter last week, the mannequin – which is reportedly an industry standard size 10 – quite clearly shows protruding collar bones and very visible ribs. Much like the model who wears the dress on the Karen Millen website, funnily enough.

Of course the image has sparked outrage from many Twitter users, including mental health campaigner Laur Evans, who was first to spot the mannequin in the West Quay store in Southampton and brought it to the unforgivable attention of social media.
However on the flip side, I have seen some responses from people questioning why this is even an issue. Having visible collar bones is not uncommon if you’re a slim size 10, and besides, doesn’t everyone knows that mannequins aren’t a realistic representation of women?

There are two things that bother me about instances such as this when they crop up on our Twitter feeds every too often. Firstly, is the fact that shop mannequins do not normally have bones on show – if they did we wouldn’t be shocked when confronted with it – but lets not even go there. This mannequin would have to be specially made, meaning the company has made a conscious decision to portray this. I can only speculate on the reasons behind this, does it make the dress look more appealing? Does it encourage more people to buy it?
I can’t answer these questions for sure, but say both answers are yes, it is ignorant and irresponsible that a respected brand would resort to these measures in the marketing of a dress, particularly given the much increased awareness of eating disorders triggered by the fashion industry.

Which leads me nicely on to my second point. The mannequin is extremely triggering. Collarbones and ribs are a core theme of the “thinspiration” sites that plague the internet and ruin lives, yet here it is so blatantly and unashamedly on display in a high street store. It is also not just in terms of eating disorders that this mannequin is damaging, it is aesthetics such as this which fuel the negative body image that dominates our culture. Sure, we may know deep down that mannequins aren’t what real women are supposed to look like but imagery like this affects people and ends in many women feeling insecure and inferior.

As a brand who describe themselves as ‘for the confident, uncompromising woman of today,’ Karen Millen really do have some explaining to do.
This mannequin is not about celebrating different body shapes, it is simply using bones to sell clothes.

As fashion department store Debenhams take the bold and brave step of introducing size 16 mannequins to their high street stores, I’m wondering if this is a step too far? Don’t get me wrong, it is definitely a positive sign that fashion retailers are starting to acknowledge the unhealthy body image issues that surround their models and campaigns, I just fear that this is the right move but in the wrong place.

It is quite a remarkable move for Debenhams to make, although they must believe there is a profit to be made from these, equally unrealistic, overweight mannequins. Size 16 might be the average women’s size in Britain, but generally speaking, size 16 is not a healthy size to be. Britain is not a healthy nation. I’m not discriminating against those who are naturally a size 16 and for whom this is a healthy weight to be, I’m talking about the majority of those size 16’s who are so because they lead an unhealthy lifestyle, of eating too much and not exercising enough.

I don’t believe shops should be promoting the message that it is okay to be overweight, it is not, and the government spends millions of pounds telling us this. This isn’t because the media says a size 16 is fat and only size zero is beautiful. It’s not okay to be overweight because its dangerous for our health. This is mind, I can’t help but wonder why Jo Swinson has decided to undo some of those millions by reassuring and encouraging people that – to put it bluntly – it’s okay to be fat.

It is the attitudes of the media, and women themselves that need to change, not the size of the shop mannequins. Of course the mannequins are not a realistic model of the average size 16 woman, with flat stomachs  and legs slimmer than my own ‘size 10’ legs, but that is because they are just that, mannequins. Dolls. Not real. Therefore, I am doubtful about how they are going to make real women feel better about their bodies. This change needs to be applied to the real women who front the fashion industry, then maybe we will get somewhere in the battle for better body image. 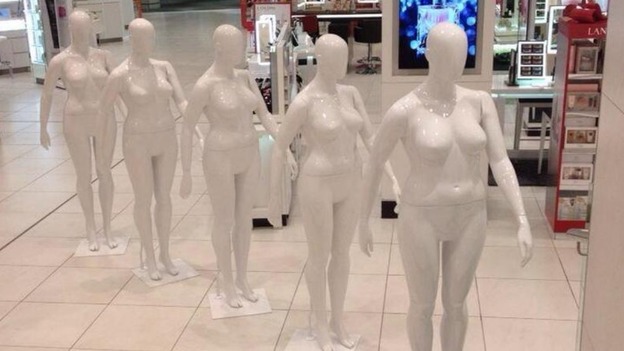 Looked up from my desk and saw this tonight 🌈
I wrote a thing about health privilege. - - It’s very long and unedited (sorry), I thought I should get it out before I changed my mind. I’ve been toying with the idea of writing about living with a chronic illness for a while, particularly since I had a flare up at the beginning of the year and it’s made me reassess a few things. I’ve written about personal things before but this is something I’m still working through day to day - it has ups and downs and so it’s harder to share. But given the strange times we are now in and seeing the response to Covid-19, I wanted to be more open about it. We need to hear more voices of those living with chronic and invisible illness. #chronicillness #ibd #coronavirus #invisibleillness #sick #stayathome
Went outside last night ✨ . . After weeks of barely feeling capable of leaving the house at the weekend, last night we drank espresso martinis and ate the best halloumi fries at @horticulturencl and then sipped gin in the Bigg Market toilets @wc_newcastle 🍸now I’m back on the sofa 👌
Happy birthday mate ❤️
Graduated with a Distinction from @sunderlanduni today, received a highest achievement award and gave the student note of thanks - quite a day to round off what’s been quite a year 🎓
🍂🍁🍂🍁
Nice 🇫🇷❤️
Èze - part II 🇫🇷
Èze 🇫🇷💙
Monaco 🇮🇩